Hi guys, it's Annie! It's also summer. Which means in Texas (where Nate and I are), the heat is slowly getting heavier...

the kids are around more...

But we're plugging along with some stuff that we're pretty excited about, and we hope other people will be too! Eventually. When we release it. Which—some of it will be soonish, some of it will be later this summer, and some of it might be a little closer to fall. But in lieu of actually being able to release the content, lemme post a check-in on how things are going!

While Nate and I are a little more constrained by our summer hours, others on the team have become whirling game-design dervishes (shout-out to our man Patrick here)! We've got a lot of combat clarity work happening, which means things like:

I've been in the Photoshop mines, crafting a bunch of new weapons for y'all. Like, a bunch. Like, I realized after doing all the math that I signed up for over 200 weapons, and what the hell is wrong with me. 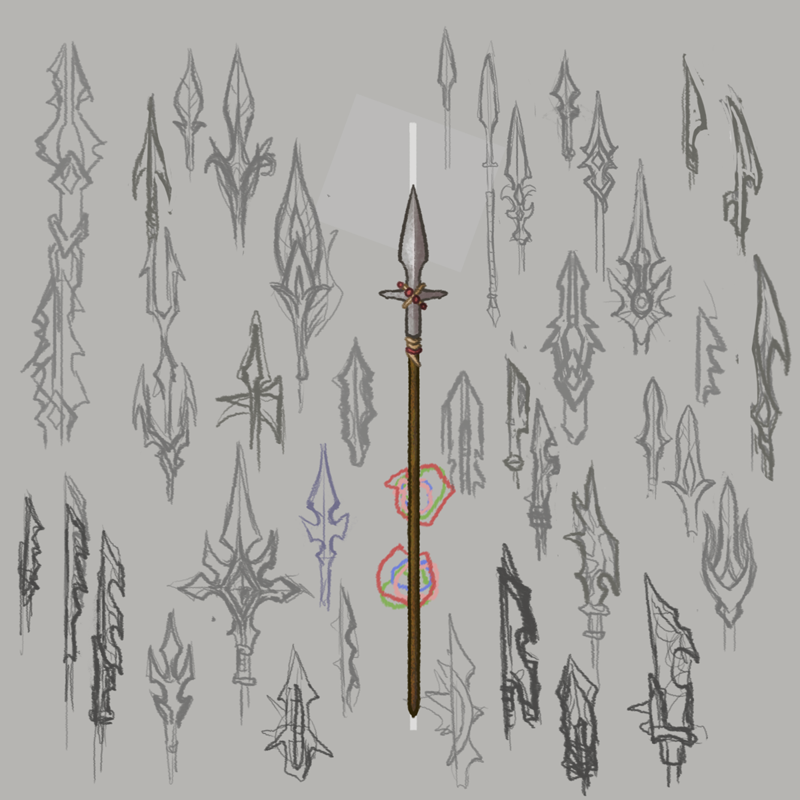 What we want to accomplish with Weapon Rework™ is this:

When you take a weapon up a tier, it feels like the same weapon, but cooler, as opposed to a totally different weapon.

We want room for fun weapon variation too, and that's where New And Improved Enchantments™ come in. Instead of giving you buffs against very specific monsters, enchantments are going to give a weapon a different visual "flavor" and a special effect on stunt (not just damage, but exciting other things like splash damage, refunding action points, and temporary HPs). So those all needed tiers too (multiplication is a harsh mistress).

The end result is that you get to feel like your weapon is more a part of your hero, since it can "scale up" with them, and you can customize the look of it more. Hopefully this also means that weapons can follow Legacy heroes a bit more than they currently do.

We're also thinking of a different way that you acquire (dare I say the word... "unlock?") these enchantments as well. Maybe creating some interesting incentives during missions!

I don't want to ruin the element of surprise here though. That wouldn't be in the spirit of the thing.

A Bit Later Than That:

I know we've talked about our villains/over-arcing campaign stories here before, and we're still chipping away at them. They're by far the biggest feature we've added to the game in the last couple years, so we're trying to take the time to get them right while making the whole system robust enough to be easily edited later (including support for players to eventually craft their own villains and campaign stories!!). We'd like to release two or three campaigns together initially, with more to come for the different monster groups, but we'll see what makes sense as we get closer to fall.

Doug has finished the writing/comics for a gripping tale of Gorgon menace, and is currently working on a mind-bending foray into the world of Thrixl. And I'm working on the script for a Morthagi mystery of muddled morality, though that's going a bit slower from down in the Photoshop mines these days.

Nate's implementing this Gorgon menace, and he's got some sweet map editor tools in a prototype-ish state, which means we can have more individually designed boss battles! (That's something we've really been feeling the lack of lately.) A lot of his programming infrastructure is done now, and it's a matter of just plugging everything in and crafting those custom encounters—including some exciting stuff we've never tried before with the Overland Map that will put additional time pressure on the heroes.

That Seems Like a Lot to Keep in Mind...

It kinda is! Our To-Do schedule boards are long. But it all happens one release at a time. We wish there were more hours in the day to do it all!