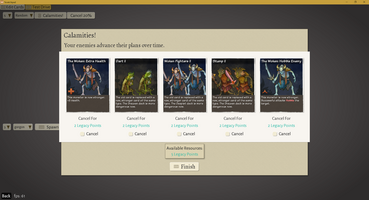 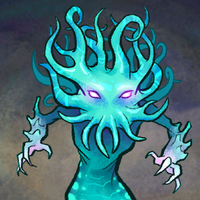 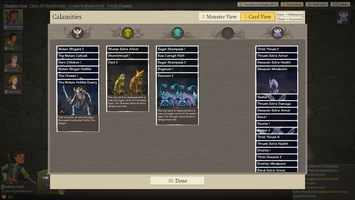 Hi! I'm Jackson, a designer and QA tester for Wildermyth. I'm gonna discuss how we've made some significant changes to help balance both individual battles and the campaign as a whole. I'll start by explaining the difficulties we were having and how fights weren't feeling challenging in the way we wanted.

So our difficulty settings are divided into two different categories. There's the Combat Difficulty, which affects base monster health, hero health, armor, and warding, among other things. Then there's Overland Difficulty. Overland Difficulty was having a much larger impact on Combat difficulty than we had anticipated. This was because the more infested tiles you had, the more cancleable calamities and incursions would occur. On the hardest difficulty, the number  of enemies on calamities would start to increase exponentially. This meant that if you took too long playing a five chapter campaign, you could end up in these unwinnable scenarios where you're fighting six Gorgons at once. 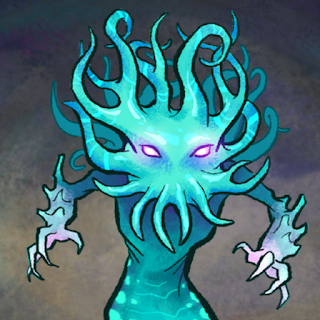 Action Economy is one of the most important things to  keep track of in a turn based RPG, and on the harder difficulties, the players would often see this economy being turned against them in the worst way. The player can only send 5 heroes at a time to a hostile site, while there's no real limit to how many enemies the player can face in a single encounter. As calamities increase, more monsters will be added to a single card and even though the same number of cards are being drawn every fight, there are just too many enemies to reasonably fight after a certain point.

The other issue with the way calamities were increasing in difficulty is that the real challenge of a particular fight all depended on where the fight took place. Some of the hardest fights in the game could be made trivial by doors and walls that the monsters couldn't bypass. Put the same number and type of monster in an a more open map and the heroes would have absolutely no chance.
The only way players could win these encounters was by using the monster's inability to destroy scenery against them. This led to combat being more about breaking the AI than tactical play, which isn't what we wanted.

So we had a bunch of ideas of how we could fix this, but we wanted to make sure the path we took would be what's best for the future of the game. We wanted to make changes that would not only fix the problem at hand, but give us more control over balance in the future.

We didn't like how many campaigns could become extremely difficult even with a limited number of cards. We also didn't want certain monsters to be so prevalent in every fight. To solve this, we made it so most cards only have one monster on them. This means that a normal fight won't have the player coming up against a dozen Gheists at once. To keep difficulty up, we also decided to make it so a fight in Chapter 5 would draw more cards (creating more monsters to fight) than a fight in Chapter 1. 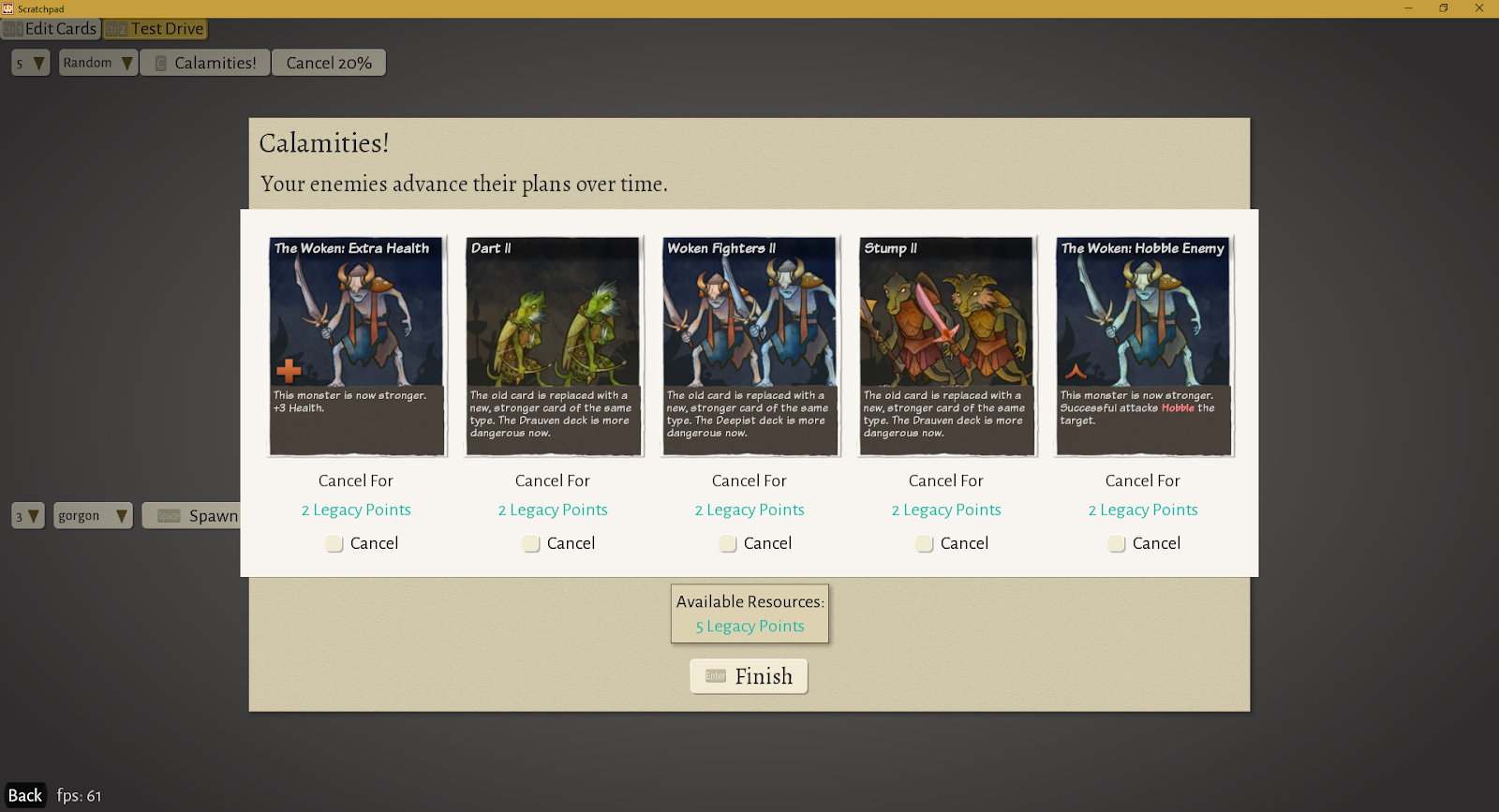 Even low level enemies can only have two or three units on one card now.

While solving the problem of overcrowding in fights, this also allows us a greater level of control when we balance difficulty levels. In the future we can have certain scenarios add more monster cards at the drop of  a hat, and  determine how many cards can be put into a single room. Another minor change we made keeps monsters from ever being alone in a room on a map like the tower. This is to keep heroes from burning through an otherwise difficult fight by picking off the monsters one by one.

Parties of More Than 3 Heroes Cannot be Ambushed

Infestations just weren't acting in an interesting way and would tend to drag out campaigns in a way that felt frustrating. We've changed it so only parties of 3 or fewer heroes can be ambushed on a tile with an infestation. We adjusted it so having a tile with an infestation on it increases the difficulty of the hostile site on or near that infestation. Heroes in groups of 3 or more can now spend time patrolling in an area to clear the infestation and reduce the difficulty of the hostile site. This gives players more choice in how they want to deal with obstacles. It might be faster to just go straight for the hostile site with your group of five heroes, but that fight's going to be a good deal harder.

Once we changed ambushes, we needed to see more calamities on higher difficulties, so we made each fight on the hardest overland difficulty give out two calamities and instead of choosing from two calamities to cancel, the player chooses between four calamities. This keeps the game difficult, but gives the player more control in how the enemy improves. This also makes Legacy Points more valuable, which is what we've wanted for a while. 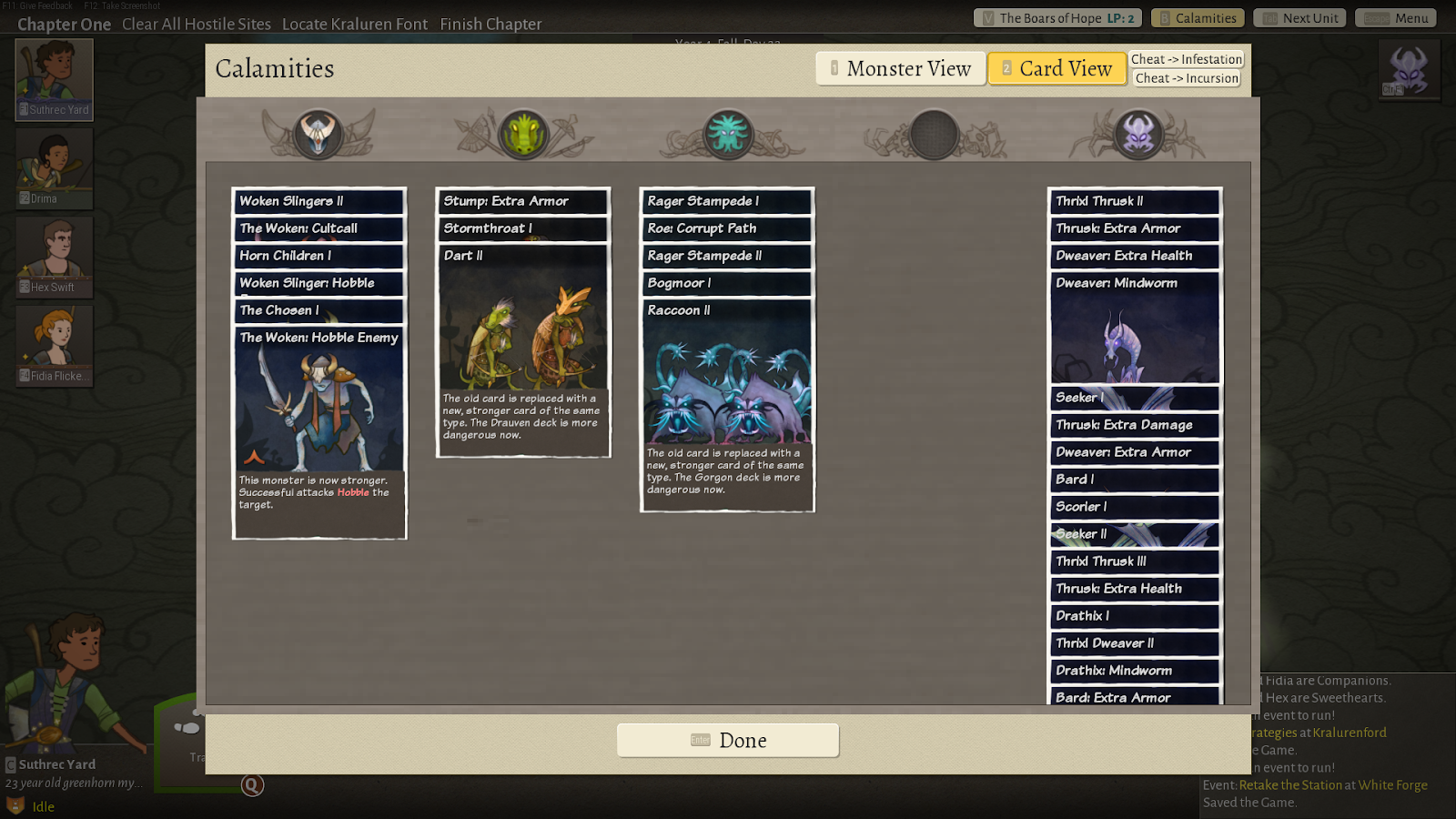 Chapter 1 looks pretty mean if you don't use Legacy Points to cancel some of these.

Legacy Points were also losing their value because players were just able to recruit too many heroes. If you played your cards right and got the right events, you could end up with 10 heroes by chapter five and still have more Legacy Points than you'd ever be able to use. We wanted to keep heroes valuable, while also making it possible to come back from rough fights in the first and second chapter. To do this, we created a scale, so the more heroes you have in your party, the more expensive it is to recruit more. We also added Legacy Point costs to recruits that came from certain events. This means that if you have 3 heroes, you'll be able to recruit more, even if legacy points are scarce.

Monsters Can Break Doors and Scenery

One of the most important parts of creating emergent gameplay, is ensuring that the enemies are able to participate in some form of counterplay. If the heroes have one ability that monsters are unable to defend against, the player will begin to only use that ability, and the game will quickly become stale. Monsters were unable to open doors and destroy scenery. This meant that larger monsters would quickly become trapped in their spawn locations, and if they didn't have a ranged attack, the heroes could just whittle them down while incurring little to no damage. It also meant that fights in an enclosed space, like the tower, became trivial. Heroes could just go room by room, clearing them out one at a time, and never having to worry about monsters in the other rooms.

We've changed it so all monsters can get through doors, either by opening them or by breaking them down. All monsters can now attack and destroy scenery as well. This should prevent the player from breaking the game, while also closing the difficulty gap between open maps and tower maps.

Monsters Can Alert Allies and No Longer Spawn Alone

The second part of giving monsters a chance on these sectioned off maps is allowing them to call for help. We added in Alarm as a free action for all monsters. The ability lets them alert all monsters within a 10 tile range or the heroes. The monsters in other rooms will then begin moving towards the heroes and a real sense of urgency is created.

Overall, we just wanted to make the difficulties feel more consistent, give monsters the opportunity of counterplay, and increase the tools we have to adjust balance in the future.

Thanks for reading! Please let us know what you think!